2 States starring Arjun Kapoor and Alia Bhatt has already touched a chord with the masses. Love triumphing against all odds is an old favourite amongst us. And clichéd as this timeline cover picture looks from the official Facebook Fan Page, 2 States has garnered the likes it deserves. Without too much of nerve racking promotional gimmicks it has harnessed 1.2 million likes.

This cover photo comes close to playing undercover cop to the crux of the film. In fact the cover photos on the Fan Page are a well etched social campaign summing up the idiosyncrasies of the film for its followers. The challenges of an inter-caste marriage between two self-reliant yet traditionally rooted individuals has been wittily showcased in the cover page album. Ringing a bell of familiarity within each one of us as we catch our own timeline photo’s always struggling to sum our lives up.

Alia Bhatt, known for her penchant to break conventions off late in cinema, did a very neat promotion of the film on Twitter as well. Sending out a public invite of the 2 States movie promo launch in the guise of an engagement card. Seeming more personalized as she released it on her own twitter account.

The card read: “As esteemed members of the family, you are invited to the engagement ceremony (or the ‘2 States’ movie promo launch) between Krish Malhotra (Arjun Kapoor) and Ananya Swaminathan (Alia Bhatt). “Please come and bless the couple on: Feb 28, Mahurat: 12 noon, Venue: YouTube, Twitter, Facebook or generally all over the web. No gifts or flowers please”. 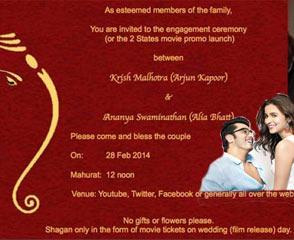 A Live chat with Alia Bhatt, Arjun Kapoor and Chetan Bhagat inviting fans to get ready with a volley of questions since the virtual world is abuzz with opinions, it is a movie that promises to encapsulate the spirit of an urban lover. The live chat could simply not have been missed. A celeb crazy audience is always looking for a personalized engagement with their favourite stars.

Alia Bhatt is also taking up the mandate to generate mileage around the movie on herself. If you follow her on twitter you cannot miss her selfies with Arjun Kapoor. Capturing memorable moments in between promotions with her 2 States co-star, this actress seems to be quite digitally upbeat. Stars, like brands know the importance of cashing in on that thing we officially brand as ‘recall value’.

Song promotions, video clippings, live chats, promotional star tours form the crux of their online marketing strategy. By far the most path-breaking post visually is the one in which we have the hash tag #ReasonsToDateANerd highlighted with an equally witty anecdote. Fan pages are a great way to get audiences hooked even before they step inside cinema halls. And 2 States does a good job of creating the right hype around this film that promises to be a realistic take on inter caste marriages. 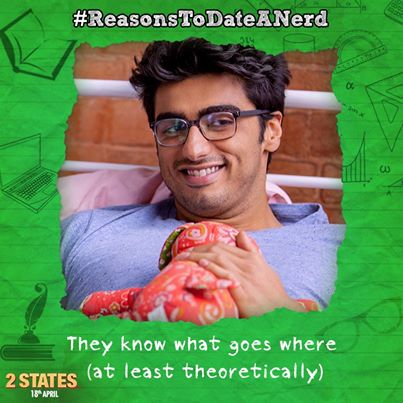 Posts are very straight jacketed. Even the launch of a song is not announced with much aplomb, this is all it really it had to say “Krish & Ananya want you to join their celebration! #IskiUski out tomorrow at noon”. Songs are souls of a film. So am sure they need to be launched with more spirit. Am sure the film promises some serious spunk. But that I think is missing in the management of its Fan Page.

Live chats, contest alerts, all India promotions that stare you in the face are nicely captured but blandly communicated. Guess a punchier announcement would make all the difference in doing justice to a film urban cities are already looking forward too. The likes will obviously pour in because of celeb craze that is rampant within all of us.

But what about developing posts that need not be directly associated with the film? May be sharing stories of couples across India who fought their folks to marry despite their differences?

Entertainment begins first on Facebook and then on screen for most of us today. Which is why the content must resonate the spirit of the film. The Fan Page can be potentially a lot more than it currently is. There is relevance. There is topicality. But there is no fun in the communication. It is too to the point. And this, after all, is Bollywood. It can be conventional or risky. But definitely not bland.