The president of the Nationalist Congress Party (NCP) – which was founded at the cusp of the millenium after separating from the Indian National Congress – Sharad Chandra Govindrao Pawar of Baramati, Maharashtra currently serves as the Union Minister of Agriculture as part of the incumbent United Progressive Alliance (UPA) government. Currently, Pawar leads the NCP delegation in the Lok Sabha, representing his constituency of Madha in Maharashtra.

Having previously performed the roles of Minister of Defence and Chief Minister of Maharashtra as well, Pawar’s tenures have been marred by allegations of corruption and criminal activity. Besides politics, Pawar has also served as the Chairman of the Board of Control for Cricket in India (BCCI) and in 2010, become the president of the International Cricket Council (ICC), making him an oft-spoken about persona in the realm of cricket, a sport that captures the fancy of a large population of the nation.

Sharad Pawar is a prominent byword in regional politics, and has a distinct say on the national level as well. Amongst the most recent items reported in the news have been Pawar’s continuing volte face when it comes to Prime Ministerial candidate Narendra Modi, who was earlier praised by him and is now at the receiving end of several taunts. Additionally, his nephew, close ally, and Deputy Chief Minister of Maharashtra Ajit Pawar has also been reported to have allegedly threatened villagers of Baramati with denying them water supply if they did not vote for the NCP in the ongoing Lok Sabha elections.

While several incidents have kept Sharad Pawar in the eye of the news, he has his say through a fairly active presence on social media as well, although limited to more popular for a like Facebook and Twitter. 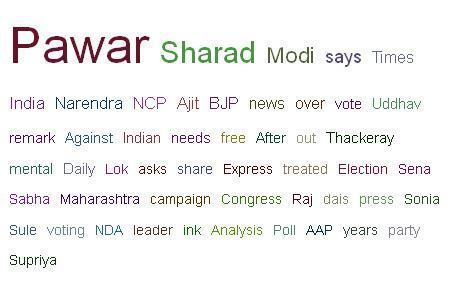 Pawar has been a fairly regular topic of discussion on Twitter since its inception, whether for brickbats or bouquets – given constant corruption allegations, regional and national politics, the incident of the politician having been slapped in public, his involvement in the nation’s beloved sport, and more.

But now, tweeting from the handle of @PawarSpeaks, the politician has his say as a new entrant on the Twitter scene as well. 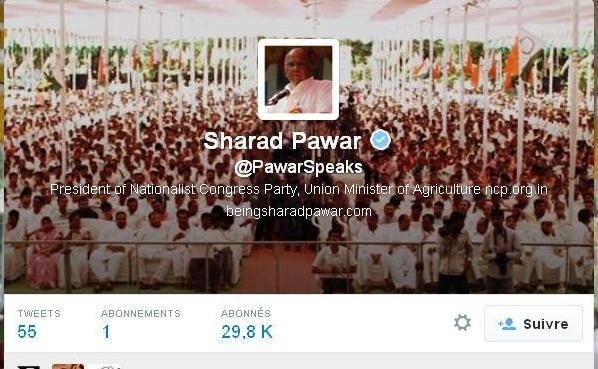 However, Pawar has barely 55 tweets just yet, on an account that was initiated in just October last year. Despite his relatively late entry on the scene, Pawar has more than 29,800 followers within 5 months, at last count. On the other hand, Pawar himself follows only one account – his party’s official verified account, @NCPspeaks. 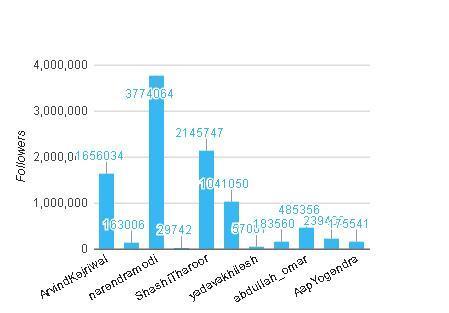 Out of the short time he has been on Twitter, Pawar’s level of engagement with his followers stands at an abysmal zero. There has been not one instance of him replying to his many mentions, and it appears the politician is on the forum less to directly engage with an audience, and more to air his views without thought of taking in opinions. 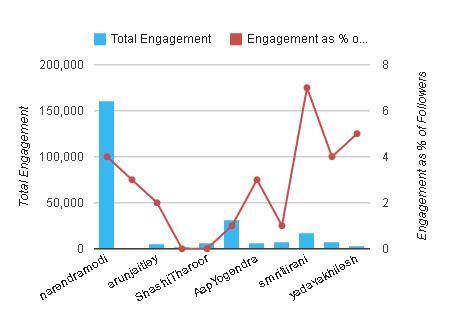 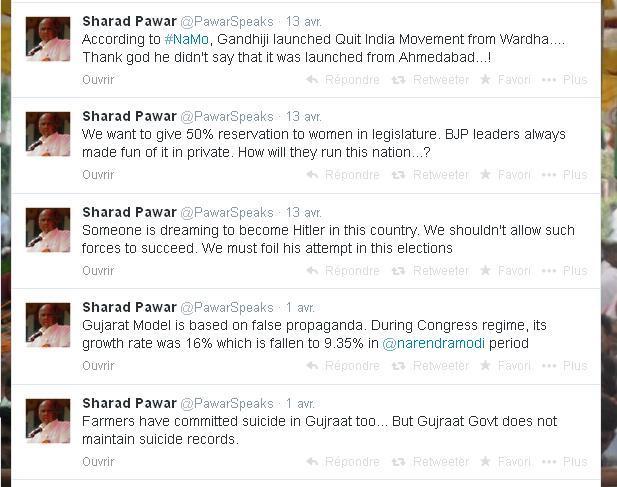 Understandably, given his lack of engagement, Pawar’s mentions have also been on the lower side compared to those of his peers, and he stands towards the bottom of a comparitive analysis. That being said, the level of mentions within the defined period has remained fairly constant.

Pawar’s tweets mainly comprise political updates, festival wishes, a couple of cricket-related tweets, links to his private blog, praise for the government at the centre, and criticism for the Aam Aadmi Party (AAP) and the Bharatiya Janata Party (BJP), in particular the latter’s PM candidate Modi, against whom several aspersions have been cast by Pawar.

Incidentally, the NCP supremo does not fare very well when it comes to a comparison with the tweets of other politicians, all of whom seem to be more active than this Union minister on the popular social media forum.

Pawar is a fairly recent entrant on Facebook as well, with his verified account having been initiated just months ago. The account, primarily in Marathi with translations to English, mainly focuses on campaigning, accounts of party activity, rallies, thoughts, views on current issues of political importance, and more. 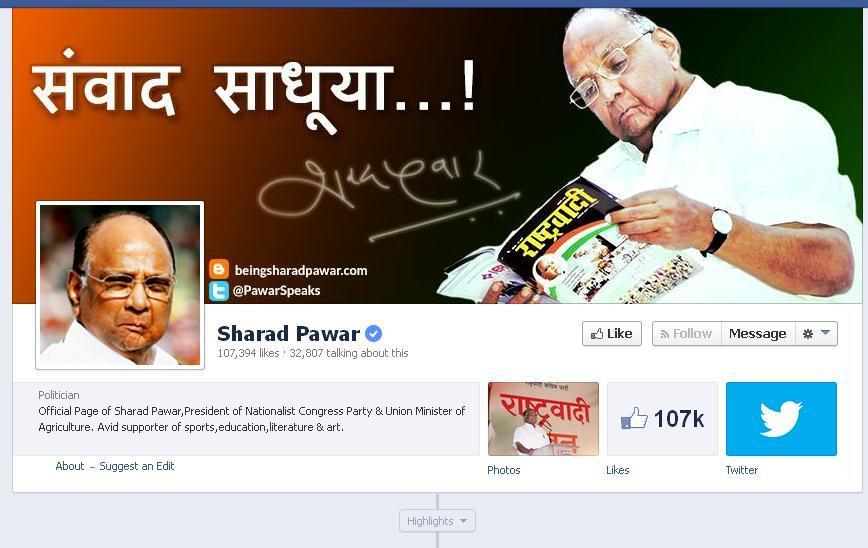 The account states around 107,445 likes at latest count, but still stands at one of the lowest levels compared to other politicians on the national scenario, indicating that Pawar certainly has some catching up to do in this realm. 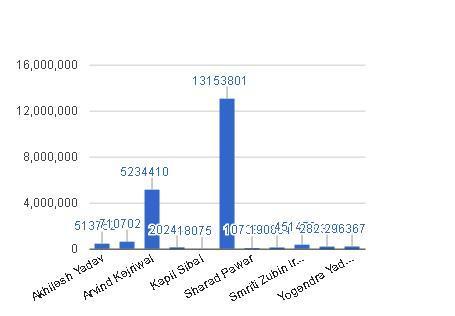 While the page mentions that 32,807 accounts are talking about it, it has to be admitted that when it comes to engagement with the masses of followers, this account, much like the Twitter one, does not have a very good track record, standing at the lowest level compared to some other politicos on the biggest social network around. Even a regional politician like Akhilesh Yadav trumps this politico when it comes to engagement on Facebook. 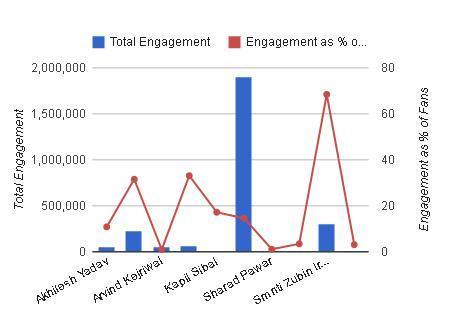 Pawar’s official blog, which both his Twitter and Facebook accounts offer links to, is a largely contemplative one with the leaders thoughts in both his mother tongue and in English on various issues. Since it was started last year, the blog does not have too many posts on it, and one expects the leader to keep adding to it as time goes by. In terms of comments by readers, while there is absolutely no overwhelming response, a little bit of commentary can be seen on most posts. 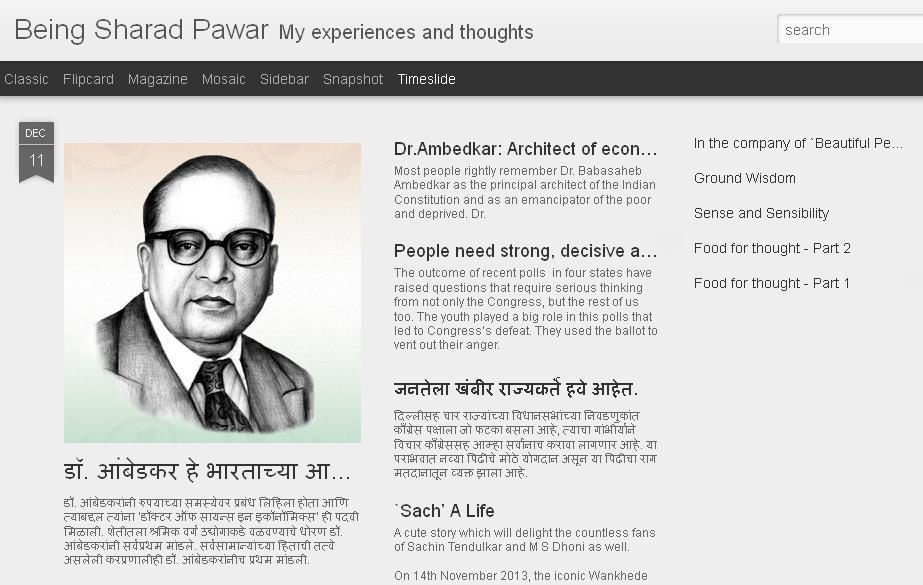 Pawar is as yet still inactive when it comes to various other fora like YouTube, Tumblr, Instagram, etc., indicating a current limited focus only on the most popular social media networks. However, the politico has much to hone on his existing accounts before he diversifies to other ones.

This of course, brings us to the an analysis of the sentiment on the basis of which Pawar is judged. Of recent times, around 13.4% of the total constitutes negative sentiment, while a very decent 86.3% is in the neutral realm. Interestingly, positive sentiment is a very negligible sliver in the proceedings. 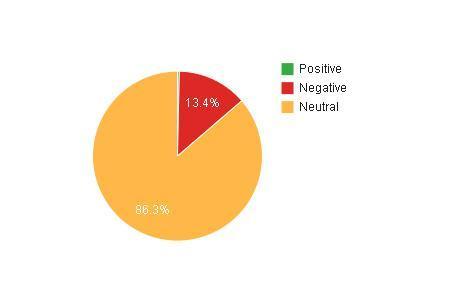 Over the defined period, sentiment by date has remained fairly inclined to the neutral, with negative sentiment taking over only after the story of his nephew’s alleged antics in their state stronghold broke out in the latter half of the week. 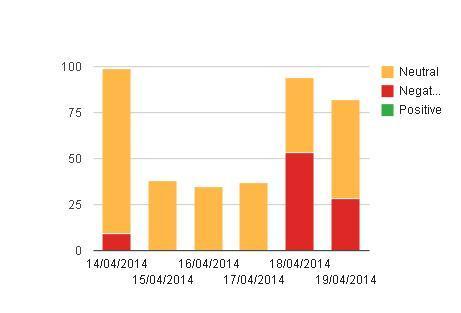 The pack of top publications that have had much to say about Pawar are led by far by the Times of India, which beats any other publication to the top, but focuses mainly on neutral items, with around one third of the matter comprising negative sentiment. This is followed by the Deccan Herald, which seems to be the only publication that has positive things to say about Pawar. The New Indian Express and Economic Times (totally neutral sentiment) and First Post and Voice of America (totally negative sentiment) follow, not far behind. 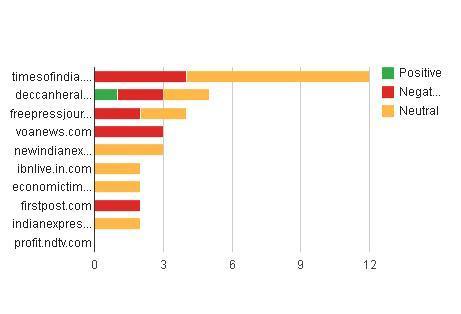 Sharad Pawar seems to have miles to go when it comes to online interactions, as since the politico’s recent entry onto the most popular social networks, he does not seem to be actively engaging enough with his fair number of followers and fans. This is perhaps one of the reasons his social media presence has not taken off like it could, given his immense regional popularity.

Moreover, the politician does not appear to have used these powerful media enough to his advantage in the run-up to the LS polls, and also does not appear to interested in diversifying his online presence just yet, with much left untapped.

Sharad Pawar’s rise on the political horizon has been marred yet steady. He has managed to show wit, innovation alongside frequent short-sighted moves.

His social media presence can be called a summarization of his career graph. However, one must bear in mind that the social media activity was initiated only recently.

Even though Sharad Pawar urges people to strike a conversation using his cover images, he fails to actually start any conversations. How can he, if he does not respond to any comments or tweets?

He is trying to take the safe route and concentrate only on the most popular social media platforms. However, he does not manage to convert those limited options into effective engagement.