“We took a look at what’s trending upwards on Snapchat, and what’s on Gen Z’s minds to see what the future may hold. Take a look at what’s predicted to make a splash in 2019, and get inspired for your upcoming products, creative, and messaging,” Snapchat said on their official blog.

According to Snapchat gaming is a hot topic for 2019. They said for Snapchatters, Minecraft is predicted to continue its popularity into the next year. Snapchat took a look at Gen Z specifically, the games teenagers predicted to increase in popularity are Fortnite, Call of Duty, and Red Dead Redemption 2. Gaming is an especially important trend for teen males, who listed it as one of their top 3 trends for the new year. Snapchat stated it is time to bid goodbye to wired headphones and say hello AirPods. Apple’s wireless earbuds will continue to be on the rise. And with a new pair rumored to release in early 2019, AirPod adoption looks strong going into next year. Apple’s impact extends beyond AirPods, too. Snapchat predicted that iPhone will gain even more in popularity in 2019 amongst the GenZ. Mobile payment apps have become popular in recent years with their convenience to accept, send, and manage payments from a smartphone. Cash App, a money transferring app, is growing in popularity and shows no signs of slowing down as speculated by Snapchat Slang words that Snapchat expects to see next year would tap into emotions. In 2019, people might find themselves with friends celebrating their born day, feeling like they are “on a date, kinda nervous.”YKTV. 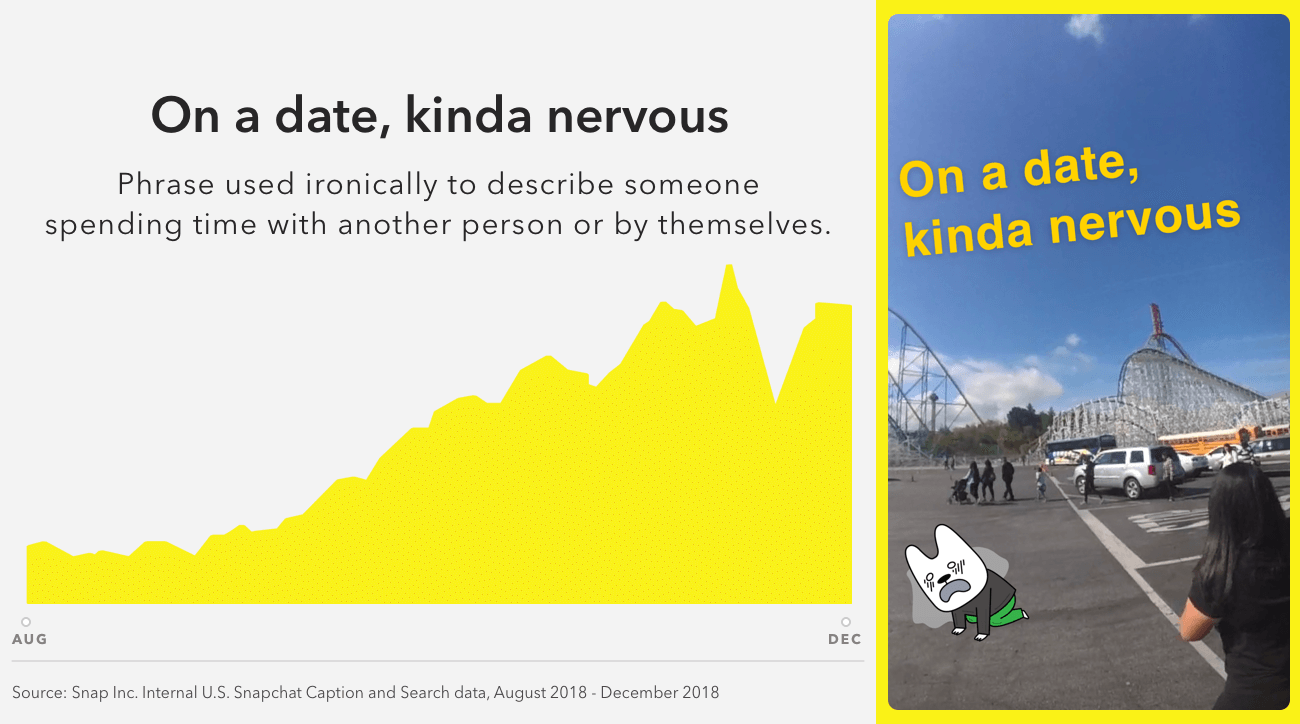 In 2019, Snapchat expects people to begin or continue sending memes that call out blunders such as “you had one job”, or intense events and the effect they have on their minds “my last brain cell.”

“Roses are red and violets are blue” was once a poetic way to express love comments Snapchat, but they anticipate that going into 2019, its meme version will replace the sentimental value with subversion, parody, and anti-humor. While teens are quick to judge memes as “silly” or “stupid,” Gen Z has envisioned memes to increase in popularity over the next year by the report of Snapchat. Hip-hop will continue to be on the rise in 2019. They have asked us to make sure to keep an eye out for Blueface, an LA rapper who’s taking the internet by storm. Blueface has managed to grab the attention of both Snapchatters and established rap artists, and his rise in popularity is just beginning as per Snapchat. When it comes to teens, they expect Cardi B to continue her rise in popularity. Boys specifically see a bright future for NBA YoungBoy, and despite XXXTentacion’s passing earlier this year, they predict that the artist will continue to top male teens’ playlists in 2019. On the other hand, as per their report, they have commented that teenage girls can’t wait to hear more from K-pop boy band BTS as well as alternative pop artist Billie Eilish, who has just been nominated for a Grammy.

Snapchat took a look at teens’ celebrity interests, internet personalities come out on top. Shane Dawson is the top-ranking personality among male and female teens alike, while James Charles, known for his beauty tips and makeup tutorials, resonates more strongly with females in the opinion of Snapchat

In 2019, female teens are planning to put forward a more “natural” look for their appearance. Snapchat presumes to see more bobs and a “clean and fresh” makeup look. Snapchat has said that teens are also leaning into vintage styles, and teens are looking forward to trying on color-coordinated, tie-dyed, and neon clothes in the new year.