Like it or not, this year’s general elections would not have been half as engrossing as it is right now if it was not for this charismatic leader.

From the day Narendra Modi was christened the prime ministerial candidate of NDA – National Democratic Alliance, an alliance of centre-right parties headed by BJP – he has taken the Indian media by storm.

He is simply omnipresent – be it online or offline. But is he omnipotent? Well, we need to wait till 16th May for the answer to that question.

However, there is no denying the fact that his political campaign has been one of the strongest among his peers. The machinery that powers his communication on traditional and online media is robust and proactive, especially his social media team.

A massive presence on social media that is managed by hundreds of people has propelled Narendra Modi to great heights.

Well, whether or not he wins the elections, he’s surely going  about with all guns blazing on social media. Let’s take a deeper look at his social media activities and see where he stacks up among his peers.

Twitter is where Narendra Modi has generated the maximum buzz. Surrounded by more than 3.5 million followers, his voice gets amplified as most of his tweets get hundreds of retweets in no time! 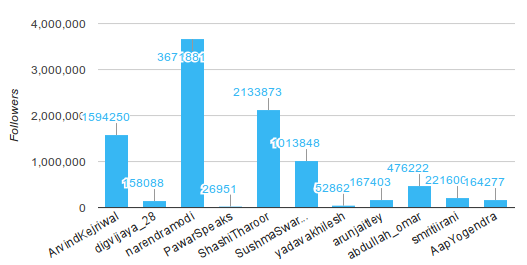 Even though his Twitter handle tweets regularly throughout the day, the kind of content that he shares is nothing spectacular.

Most of his tweets are about sharing his stories for his campaign trails. He shares the sentiments of the people he met, the state of that particular city/region and the response of people towards BJP.

Moreover, he also bashes the Congress quite frequently in his tweets. Targeting the incumbent party for poor economy and taking pot shots at Rahul Gandi seem to be his favorite.

I would love to see him engage with people on Twitter, though. He hardly responds to people via Twitter. Nor does he try to ask questions or strike a conversation with them. People on Twitter are vociferous and engaging in discussion with them will only propel his agenda. It will also portray him as a leader who listens to the masses.

Organizing a Twitter chat won’t be that difficult now, will it?

Despite his lack of efforts to engage with people, people are still engaging with his tweets, and how! Even though he has managed to engage only 3% of his followers, he has derived a total engagement of 128k, which is 3X more than his closest rival, Arvind Kejriwal.

He even gets a flood of mentions by users on Twitter on a daily basis. Arvind Kejriwal, however, leads this race for mentions. Both are neck to neck as people are talking only about these two stalwarts on Twitter, and Kejriwal just manages to pip Modi with a small margin.

Needless to say, he has the biggest community on Facebook. 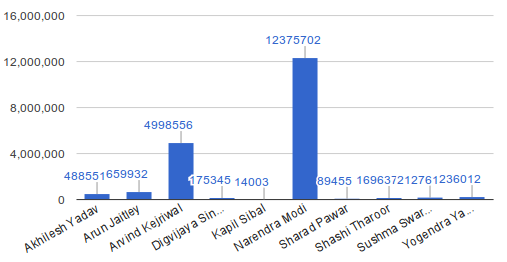 The content shared by Narendra Modi’s page is very much similar to what is shared on Twitter – less potshots on Rahul Gandhi and more images from his rallies. 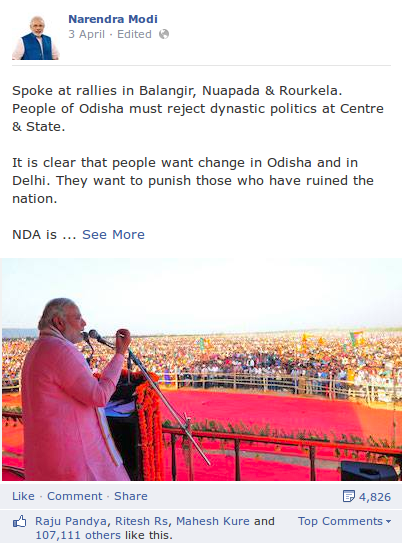 However, there are no attempts to engage with people here either. In fact, when I went through his Facebook page, most of the comments were in Hindi and when I looked at his updates, hardly 1 or 2 were in Hindi. 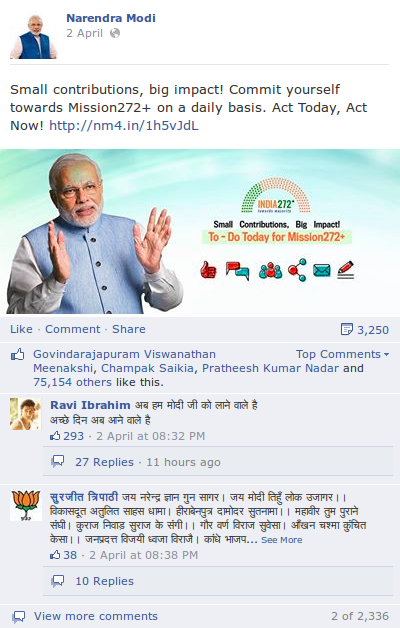 May be his social media team should consider sharing more updates in Hindi in order to connect better with his audience. Isn’t it better to converse in the medium your audience is comfortable with? I think it is.

You just can’t ignore the fact that people are really mesmerized by him!

He’s got a decent 2600 odd followers on Pinterest who keep track of his pins and shares. He has made good use of boards and keeps sharing content around his campaign activities and his ideas for the growth of India.

Boasting of more than 132k subscribers and cumulative video view count on the north of 15m, Narendra Modi’s YouTube channel is filled with his speeches. 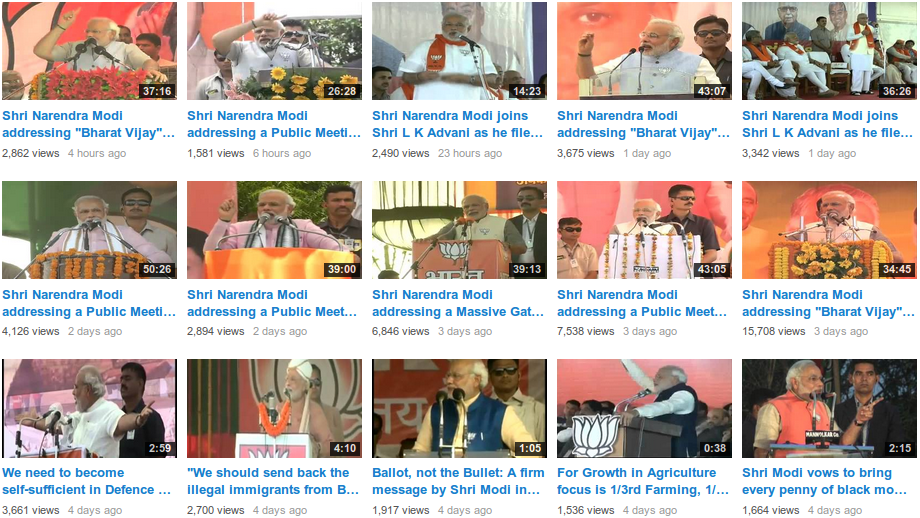 Every single rally of his is captured and uploaded on his YouTube channel for his online fans to watch. These videos are then embedded on his blog and they get shared on Facebook & Twitter, which is a little surprising. Why not share it directly?

The channel is making good use of playlists and is also sharing videos with subtitles for people of different regions to view them – which is a really smart strategy!

Nothing much to talk about except to gush about the huge following he has on Google Plus as well – 1.267m followers.

Apart from all these platforms, he is also present on Flickr, Tumblr and StumbleUpon but is very less active. He also has a blog where he posts every month or so. And neither does he need to! He doesn’t need to spread himself thin and put efforts into platforms which won’t bring him any benefit.

Now let’s come to the most interesting part of this analysis – the sentiment.

The week gone by saw a lot of negativity around Narendra Modi. With more than 500 negative mentions, the overall negative sentiments around him was 13.4%. 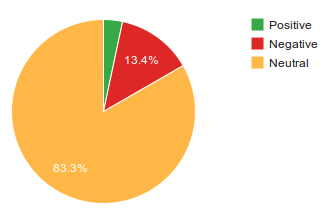 In comparison, there were only 132 positive mentions of him in the online media – which accounted for just 3.3% of mentions.

One possible reason behind this could be the fact that the week gone by saw scathing articles from The Economist that spoke negatively about him. The article titled India Deserves Better Than Modi caused a huge furore and became a huge topic of discussion.

Times of India, followed closely by Voanews.com and IBNLive, were the ones to talk more negatively about Narendra Modi than the others. But Times of India and Economic Times were also the ones who have carried the most number of positive stories around him.

If Narendra Modi manages to lose this election after all this awesomeness displayed on social media platforms, the social media industry should probably pack its bags and go home!

His social media team has showcased exemplary performance and has managed to keep him on top of everyone for a very long time. Going by the numbers on his social media platforms, his victory seems inevitable. But will the dance of democracy, dance to his tunes? Only time will tell.

May 16th, I can’t wait for you. Neither can the rest of India!

Narendra Modi might not have won the elections yet, but with his magnificent approach on social media, it is probably rightful to suggest that its hinting at every possible victory. His fan following has grown tremendously over the years and so have his virtual admirers. After his famous stints at various rallies, TV interviews and campaigning events, there is a even larger conversation roaring on Facebook and Twitter for days after that. He is leading the race with top fans and followers among all politicians and constantly staying on top of the graph w.r.t web mentions.

He proved himself a visionary and leader of the pack by being the first to embrace social media. After his successful use of technology led him to address 53 states of Gujarat simultaneously and conducting the first ever Google hangout, Narendra Modi came to be known as an internet friendly person. Such a title was never given to a politician before and this became his claim to fame among the youth too. His recent endeavors like Chai Pe Charcha, #NAMO conversations and constant updates and tweets have only re instilled people’s trust within the man.

There is no denying that Narendra Modi has become an iconic Social Politician.

#EveOfShame: It was all 'The Easy Girl's' fault
Langoor bags the digital mandate of MoneyGram
Know Your Leader: Nirmala Sitharaman
A look at 101 India's YouTube series 'Outrun'
Facebook partners with National Geographic to launch Live 360 streaming
Opinion: How Augmented Reality is transforming CX now more than ever