Building hype and creating a buzz around a movie release has been, and will remain the order of the day while movies are made. However, pre-release promotions are becoming more and more interactive and social.

In recent times, the power of social media is being used to launch campaigns that very often go viral. Platforms like YouTube, Facebook, and Twitter have become an intrinsic part of a film’s promotional campaign. Here is a look at how upcoming movies are using social media as a promotional strategy.

In a bid to position Dhoom 3 differently, 99Games Online Pvt. Ltd and Yash Raj Films Pvt. Ltd. launched the official game for the Dhoom 3 movie on the Windows Phone. “Join the Chase,” a campaign hosted on a dedicated Facebook app is another recent endeavour. What is common to both endeavours is the spirit of reality and involvement.

In the game, participants can don the cap of Dhoom 3’s anti hero and Zoom through the streets of Chicago, while the app lets participants join the hero in a chase.

The prizes on offer are something that make people sit up and take notice, because the 1000 CC BMW bike from the film is the grand prize for the Facebook based contest, while participants are kept engaged with mini contests and the opportunity to win points at every stage.  The 3D racing game is available exclusively on the Windows phone with state of the art graphics. 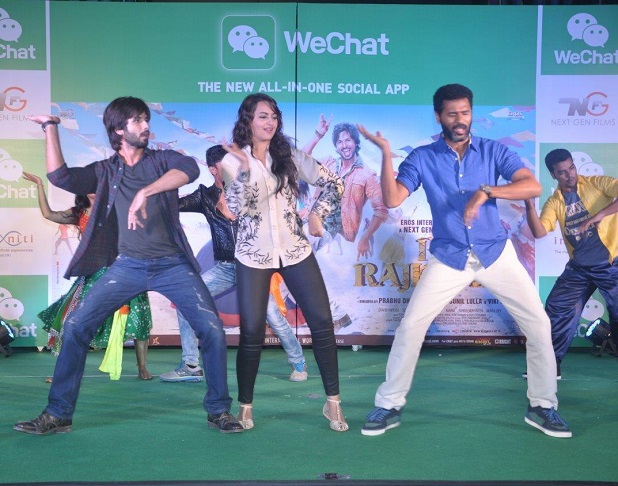 WeChat, the “All-In-One” social messaging application has chosen to partner with the makers of R…Rajkumar to connect with the youth across the country. The movie is all set to hit the screens on December 6, 2013. As part of the partnership, a co-branded TVC with the lead stars has been launched, which users can watch here.

As an endeavor to connect young fans with their favorite stars, WeChat will also gave its users an opportunity to interact with Shahid Kapoor through a ‘Group Chat’ on December 5, 2013. With this association, WeChat now brings movies straight to the mobile screens of its users.

Bullett Raja: Riding high on the power of Twitter

Micro blogging site Twitter was the social media platform Bullett Raja used to host an inter-city competition challenging fans from various cities to show their love for Bullett Raja. An interactive Twitter heat map was created to boost the tagline “Aayenge toh Garmi Badhayenge” and to engender the inter-city rivalry. The city with the highest number of tweets would see the Bullett Raja Trailer first and get exclusive gifts.

Fans were asked to tweet as to why they would want the Bullett Raja trailer to be released in their city first with the hashtag #wewantBullettRaja and mention their city name. Upcoming film JAI HO is already making waves on social media, way before its release. Salman Khan had announced the release of JAI HO’s first trailer on December 5, but the event got postponed by a week and fans only grew more restless.

However, the actor did not disappoint his fans and got on to a social networking site to invite them to design the first poster of his much awaited film JAI HO. Salman posted:

Very soon the social networking site was flooded with messages for Salman with ‘JAIHOPosterToday’ trending on it. Salman also posted a link for his fans to help him design the poster. The server crashed, but after a few efforts, finally the first poster of JAI HO was released on social media. Salman again posted saying:

The early 2014 release of Dedh Ishqiya is much awaited as the film stars Madhuri Dixit. The promotion and marketing strategy of the film is still a work in progress, but there are plans to release a couple of teasers over the coming weeks, and the launch of each character one by one are afoot.

The use of a social networking platform to promote the film will be made, and the first trailer of Dedh Ishqiya will be released on Facebook by dedicating 350 million impressions.

A look at these social media moves by filmmakers and their campaign managers shows us that social media is now a necessary aspect of a film’s promotional strategy. It is more of a constant, with the only change being the method in which each movie is being promoted on these platforms. Creativity, innovation, and technology are being interwoven with the film’s storyline, characters and stars.  The end in mind is the same: building a buzz while keeping the audience interested in the film as it leads up to its release.